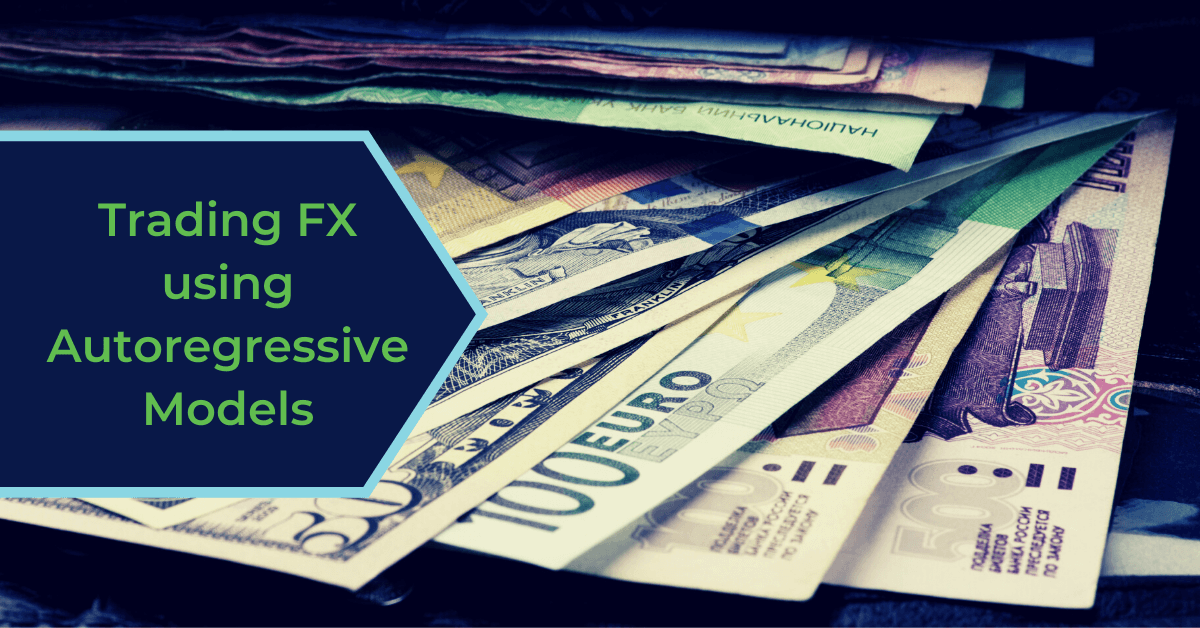 I’m a big fan of Ernie Chan’s quant trading books: Quantitative Trading, Algorithmic Trading, and Machine Trading. There are some great insights in there, but the thing I like most is the simple but thorough treatment of various edges and the quant tools you might use to research and trade them. Ernie explicitly states that the examples in the books won’t be tradable, but they’ve certainly provided fertile ground for ideas.

In Machine Trading, there is an FX strategy based on an autoregressive model of intraday price data. It has a remarkably attractive pre-cost equity curve, and since I am attracted to shiny objects, I thought I’d take a closer look.

An autoregressive (AR) model is a time-series multiple regression where:

If we used a single prior value as the only predictor, the AR model would be called an \(AR(1)\) and it would look like:

If we used two prior values, it would be called an \(AR(2)\) model and would look like:

You get the picture.

“Time-series techniques are most useful in markets where fundamental information and intuition are either lacking or not particularly useful for short-term predictions. Currencies … fit this bill.” 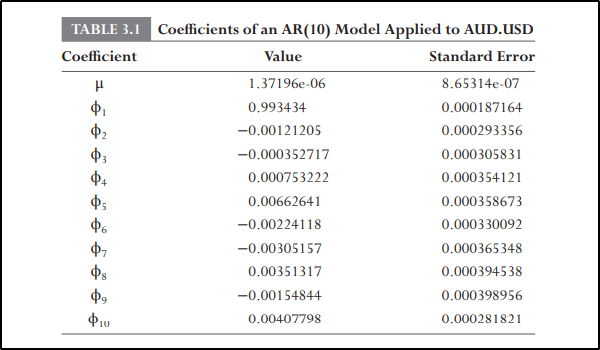 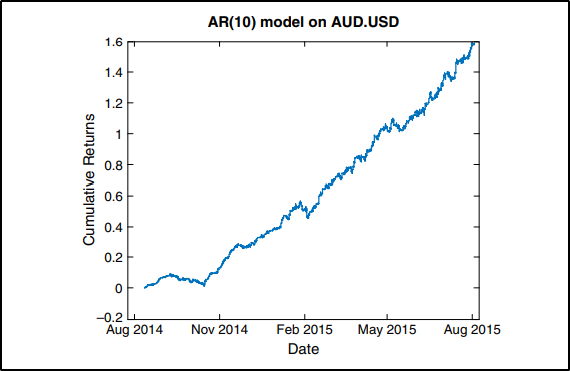 Thinking deeper about the model

If we were to use an \(AR(p)\) model of prices to predict future prices, what are we assuming?

Essentially, that past prices are correlated with future prices, to the extent that they contain tradable information.

The first part of that seems perfectly reasonable. After all, a very good place to start predicting tomorrow’s price would be today’s price. The latter part of that however is fairly heroic. Such a naive forecast is obviously not going to help much when it comes to making profitable trades. If we could forecast returns on the other hand…now that would be a useful thing!

Most quants will tell you that price levels can’t contain information that is predictive in a useful way, and that instead, you need to focus on the process that manifests those prices – namely, returns. Building a time series model on prices feels a bit like doing technical analysis… albeit with a more interesting tool than a trend line.

Anyway, let’s put that aside for now and dig in.

If we’re going to use an AR model, then a reasonable place to start would be figuring out if we have an AR process. For that, we can use the acffunction in R: 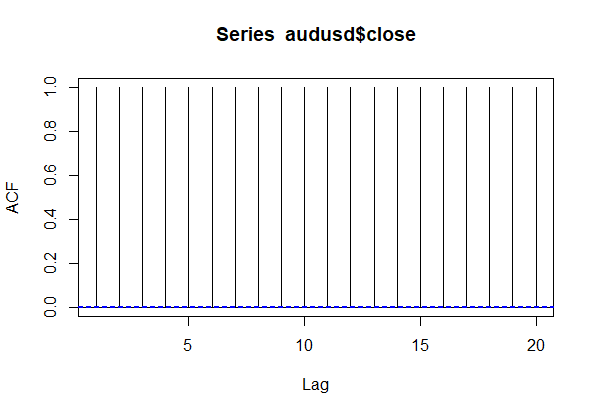 Our minutely price series is indeed very strongly autocorrelated, as we’d expect. We have a lot of data (I used minutely data from 2009 – 2020), and of course, the price from one minute ago looks a lot like the price right now.

We can use the partial autocorrelation function (pacf) to get a handle on how many lags we might need to build an AR model.

A partial autocorrelation is the correlation of a variable and a lagged version of itself that isn’t explained by correlations of previous lags. Essentially, it prevents information explained by prior lags from leaking into subsequent lags.

That makes it a useful way to identify the number of lags to use in your AR model – if there is a significant partial correlation at a lag, then that lag has some explanatory power over your variable and should be included. Indeed, you find that the partial correlation values correspond to the coefficients of the AR model.

Here are the partial autocorrelations with the lag-0 correlation removed: 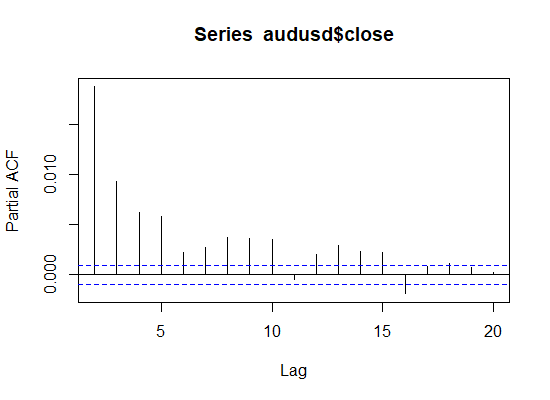 This is interesting. If our price data were a random walk, we’d expect no lags of the PACF plot to be significant. Here, we have many lags having significant autocorrelation – is our price series weakly stationary, or does it drift?

Here’s a random walk simulation and the resulting PACF plot for comparison:

Here’s a plot of the random walk: 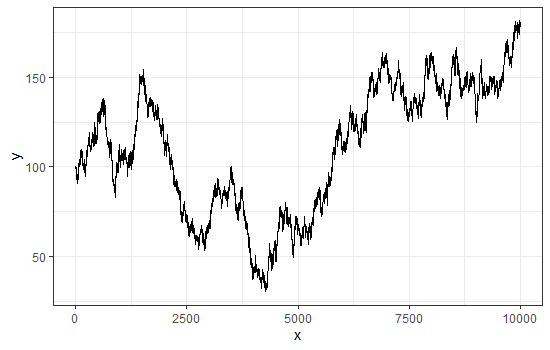 And the PACF plot (again, with the lag-0 correlation removed): 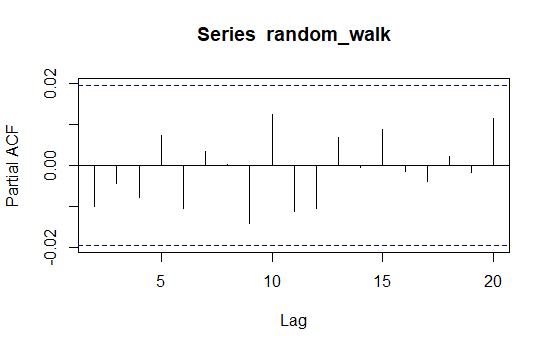 Returning to the PACF plot of our price data, Ernie’s choice of 10 lags for his AR model looks reasonable (those partial correlation values translate to the coefficients of the AR model), but the data also suggests that going as far back as 15 lags is OK too.

It would be interesting to see how that PACF plot changes through time. Here it is separately for each year in our data set: 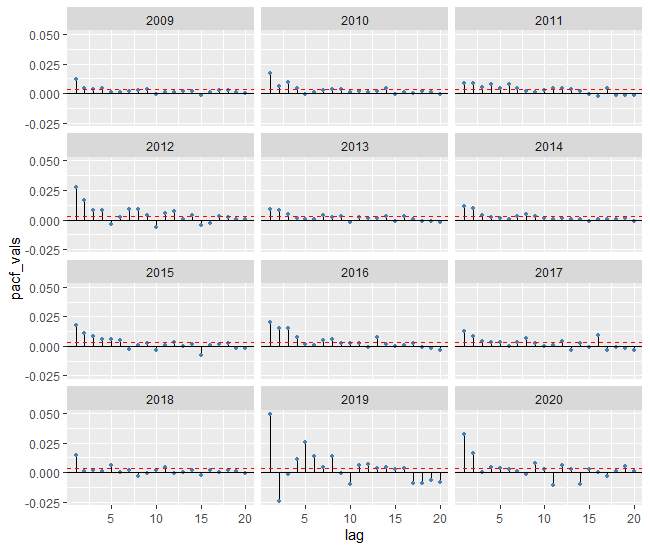 Those partial correlations do look quite stable… But remember, we’re not seeing any information about returns here – we’re only seeing that recent prices are correlated with past prices.

My gut feel is that this represents the noisy mean reversion you tend to see in FX at short time scales. Take a look at this ACF plot of minutely returns (not prices): 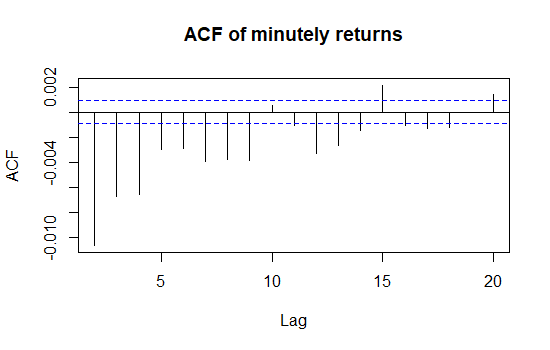 I think we can make the following assumptions:

I’ll use R to fit the \(AR(10)\) model. I’ll use Zorro to simulate the profit and loss of a strategy that traded on the basis of that model’s predictions. In the simulation, I’ll use Zorro’s R bridge to execute an R function that returns the step-ahead prediction given the last ten prices. Here’s a tutorial for setting up Zorro’s R bridge if you’d like to follow along.

First, here’s how to fit the \(AR(10)\) model in R (I have my AUD/USD prices in a dataframe indexed by timestamp):

Here we use the arima function from the stats package and specify an order of (10, 0, 0). Those numbers correspond to the number of autoregressive terms, the degree of differencing, and the number of moving average terms, respectively. Specifying zero for the latter two results in an AR model.

Here are the model coefficients:

Next, here’s an R function for generating predictions from an AR model:

If you supply the fixed parameter (corresponding to the model coefficients), the function returns the step-ahead prediction given the values in series. The length of series needs to be the same asorder, and the length of fixed needs to be order + 1 to account for the intercept term.

If you don’t supply the fixed parameter, the function will fit an \(AR(order)\) model on the data in series and return the step-ahead prediction.

Save this file in Zorro’s Strategy folder.

Finally, here’s the Zorro code for running the simulation given our model parameters derived above (no transaction costs):

Now, since we’re calling out to R once every minute for a new prediction, this simulation is going to take a while. Let’s just run it for a couple of years out of sample while we go make a cocktail…

Which is quite consistent with Ernie’s pre-cost backtest (noting differences due to slightly different historical data periods and modeling software. Also note that Zorro’s percent return calculation is based on the assumption that you invest the minimum amount in order to avoid a margin call in the backtest – hence why it looks astronomically large in this case).

Unfortunately, this is a massively hyperactive strategy that is going to get killed by costs. You can see in the Zorro backtest that the average pre-cost profit per trade is only 0.1 pip. That’s going to make your FX broker extremely pleased.

Is there something we can trade here?

Transaction costs are a major problem, so let’s start there.

If we saw evidence of partial autocorrelation at longer time horizons, we could potentially slow the strategy down such that it traded less frequently and held on to positions for longer. 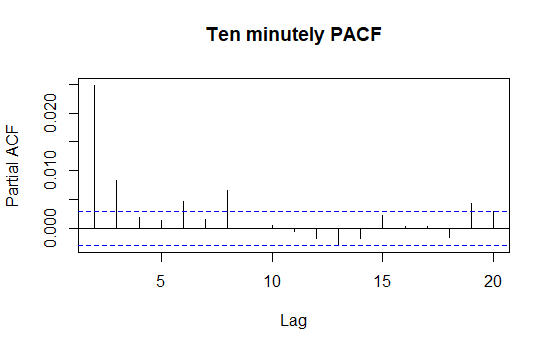 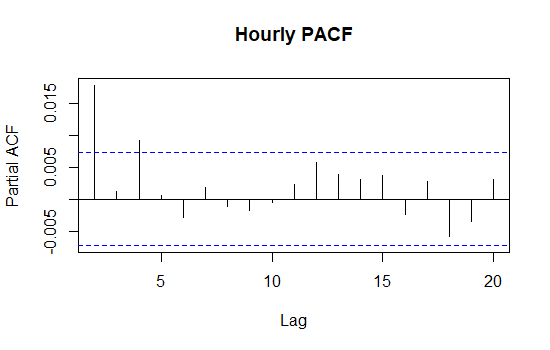 Finally, at the daily resolution: 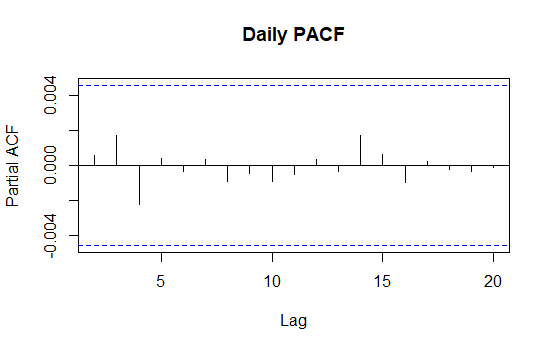 There’s a pattern emerging there, with fewer and fewer significant partial correlations as we increase the resolution.

We can try an \(AR(10)\) model using ten-minutely data. Follow the same procedure above, where we calculate the coefficients in R, then hard-code them in our Zorro script. This gives the following result: 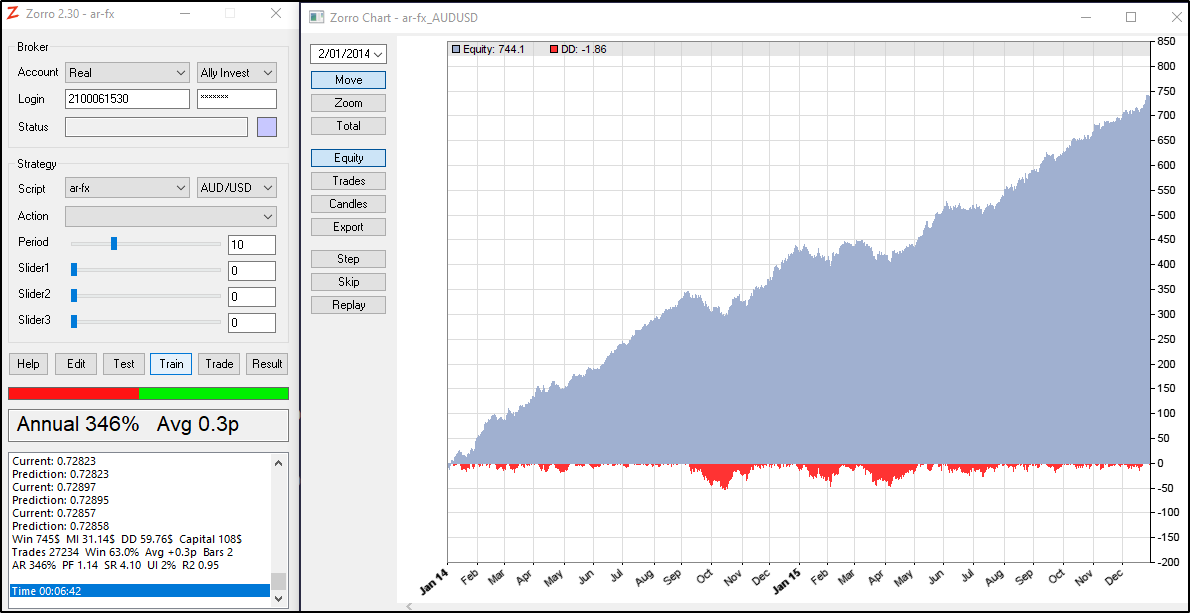 We managed to triple our average cost per trade, but it’s still not going to come close to covering costs.

At this point, it’s becoming quite clear (if it wasn’t already) that this is a very marginal trade, no matter how you cut it. However, some other things that might be worth considering include:

Fitting an autoregressive model to historical prices of FX was a fun exercise that yielded a surprising result: namely, the deviation of the price series from the assumption of a random walk. The analysis suggests that short-term mean reversion of FX exists, but is unlikely to be something we can trade effectively.

When we think about what the strategy is really doing, it’s merely trading mean-reversion around a recent price level. It’s unlikely that the ten AR lags are doing anything more nuanced than trading a noisy short-term reversal effect that could probably be harnessed in a more simple and effective way. For example, we could very likely get a similar result with less fuss by looking to fade extreme moves in the short term.

Maybe there are sophisticated and important interdependencies between those ten lags, but I don’t think we should assume that there are. In any event, no matter how we trade this effect, it’s unlikely to yield profit after costs.