The S&P index committee recently announced that Tesla, already one of the biggest stocks listed in the country, would be included in the S&P 500.

Due to TSLA’s size, it was widely expected to have entered the S&P 500 index much earlier – but S&P has some discretionary criteria it applies to ensure that the index is an effective measure of the larger stocks in the market. I suspect they worried that TSLA’s recent parabolic move was unsustainable.

TSLA’s inclusion in the index is going to be a big deal because TSLA is so big. The S&P 500 is a market capitalization-weighted index. If prices stay roughly the same, then TSLA will represent over 1% of the index – putting it near the top 10 on its inclusion.

Now, there’s a lot of money that is tracking that index. On the rebalance date these indexers will need to:

Finger in the air, we’re talking $50 – $80 billion dollars (ish) worth of rebalancing trading that will need to occur around December 21st.

Due to the sheer size of the rebalance, S&P is seeking feedback on whether the index should be rebalanced in two tranches, or all in one go.

So is there a trade here?

Certainly, we know there’s going to be a large amount of rebalance trading going on. Could that generate dislocations that may be tradeable?

Quite possibly… though maybe not in immediately obvious ways.

Everybody knows that everyone knows there will be significant demand for TSLA stock on the rebalance. So, on the S&P announcement, the stock price of TSLA jumped about 13%. Markets are forward-looking like that, you see. They don’t wait for permission.

Anything obvious gets “priced in” pretty quick. But an understanding of over-reaction/under-reaction dynamics, trader constraints, and some statistical analysis can sometimes uncover noisy inefficiencies around these kinds of events.

Early studies such as The S&P 500 Index Effect in Continuous Time: Evidence from Overnight, Intraday and Tick-By-Tick Stock Price Performance by Brooks and Ward suggested that:

In a more recent paper, The Diminished Effect of Index Rebalances, Konstantina Kappou finds no tradeable abnormal returns between the announcement and the index rebalance dates. This suggests that market participants have become more effective in pre-positioning themselves for such an event, and indexers have become more sophisticated in avoiding market impact on rebalancing.

However – they do find what appear to be tradeable patterns on and after the index inclusion date.

In particular, using data between 2002 and 2013 (and a total of 276 index inclusions) the author finds highly significant excess returns for the stock on the first day it is included in the index (see green box) – which reverse thereafter. 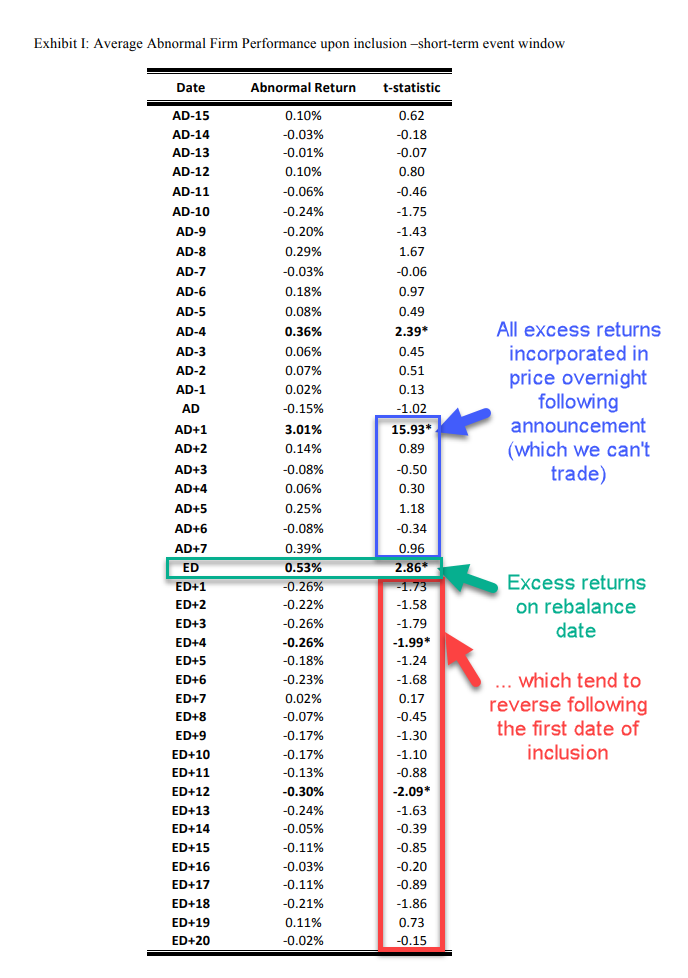 Now – I’ve done no work to validate this. And I don’t intend to. (One has to prioritize one’s efforts.)

But this research suggests:

At best these kinds of trades are marginal. You’re never going to get rich trading stuff like this.

Do your own analysis and trade small. S&P rebalancing in two tranches may change the dynamics here. If that happens then look into it and see if you can figure out a way you might be able to exploit the dynamics.