In the first Mean Reversion and Cointegration post, I explored mean reversion of individual financial time series using techniques such as the Augmented Dickey-Fuller test, the Hurst exponent and the Ornstein-Uhlenbeck equation for a mean reverting stochastic process. I also presented a simple linear mean reversion strategy as a proof of concept. In this post, I’ll explore artificial stationary time series and will present a more practical trading strategy for exploiting mean reversion. Again this work is based on Ernie Chan’s Algorithmic Trading, which I highly recommend and have used as inspiration for a great deal of my own research.

Go easy on my design abilities…

In presenting my results, I have purposefully shown equity curves from mean reversion strategies that go through periods of stellar performance as well as periods so bad that they would send most traders broke. Rather than cherry pick the good performance, I want to demonstrate what I think is of utmost importance in this type of trading, namely that the nature of mean reversion for any financial time series is constantly changing. At times this dynamism can be accounted for by updating the hedge ratios or other strategy parameters. At other times, the only solution is to abandon the mean reversion approach altogether, perhaps in favour of a trend following approach.

As this post will demonstrate, finding or constructing mean reverting price series is a relatively simple matter. The real key to profitably exploiting such series is the much more difficult matter of understanding, in real time, whether to continue a strategy as is, update its parameters or put it on ice temporarily or permanently.

A collection of non-stationary time series variables are said to be cointegrated if there exists a linear combination of those variables that creates a stationary time series. This implies that we can artificially construct a mean reverting time series through the appropriate combination of non-stationary time series. For example, we can construct a portfolio of assets whose market value is a stationary time series and thus amenable to profitable exploitation through mean-reversion techniques, even through the price series of the constituent assets are not themselves mean reverting. A pairs trading strategy, where we buy one asset and short another with an appropriate allocation of capital to each, is an example of this method for exploiting the concept of cointegration, but we can also create more complex portfolios of three or more assets.

We can test whether a given combination of assets forms a stationary process using the stationarity tests described in the previous post. However, it is impossible to know a priori the coefficients (or hedge ratios) that form a stationary portfolio. How then does one test for cointegration? I’ll explore two approaches: the Cointegrated Augmented Dickey-Fuller test and the Johansen test.

The Cointegrated Augmented Dickey-Fuller Test (CADF test) involves firstly performing a linear regression between two price series to determine the portfolio’s optimal hedge ratio and then conducting a stationarity test on the portfolio’s price series. The example below illustrates this concept using the currencies of Australia and New Zealand since they seem likely to cointegrate given that the economies of both countries are commodity-based and are affected by similar geopolitical forces.

This extends the example in the first post, which explored the mean reverting tendencies of the foreign exchange pair AUD/NZD. In that example, the hedge ratio is always one since equal amounts of AUD and NZD are always being bought and sold. In this example, we allow for a flexible hedge ratio and attempt its optimization. In order to achieve this, we need to introduce a common quote currency, the more liquid the better. It makes sense to choose the US dollar. Therefore, the example below seeks to exploit a stationary portfolio of AUD/USD and NZD/USD.

Firstly, the price series of both exchange rates for the period 2009 to mid-2015, which look like they may cointegrate: 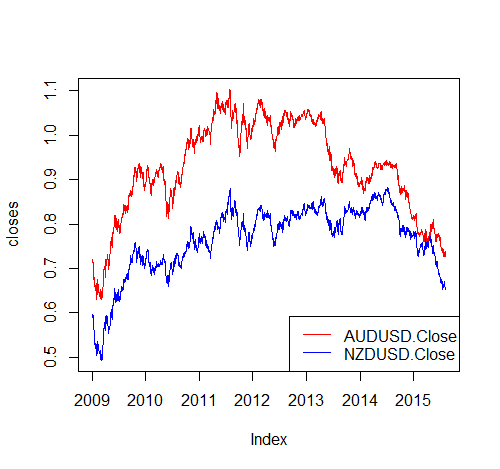 A scatter plot further suggests that the price series may cointegrate as the price pairs fall on  a roughly straight line:

We can use least squares regression to find the optimal hedge ratio and plot the residual of AUD/USD-beta*NZD/USD, which admittedly does not look overly stationary: 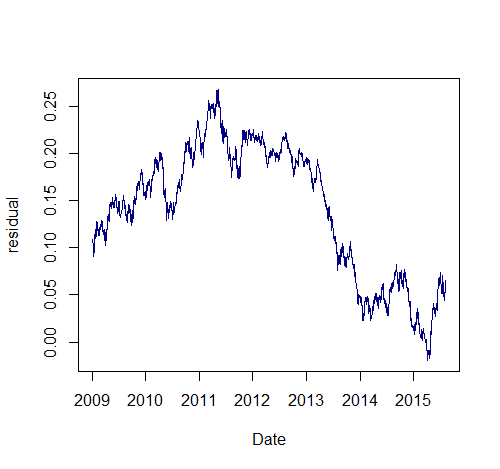 Next we apply the ADF test to the spread (see the previous post for a brief description of the urca package, and why its implementation of the ADF test is suitable for this application):

One shortcoming of the ordinary least squares approach is that it is asymmetric: switching the dependent and independent variables in the regression results in a different hedge ratio. Good practice would dictate that both options be tested and the arrangement that results in the more negative test statistic be selected. Another approach is to use total least squares regression, which can be used to derive a  symmetric hedge ratio. In a geometrical sense, total least squares minimizes the orthogonal distance to the regression line (as opposed to the vertical distance in the case of ordinary least squares) and thus takes into account variance of both the dependent and independent variables. The total least squares solution is easily computed in R using principal component analysis and is not limited to a two-asset portfolio:


This results in a more negative test statistic and a visually more stationary spread (at least for the period 2009 – 2012, see the figure below), but we are still unable to reject the null hypothesis that the spread obtained through total least squares regression is mean reverting. 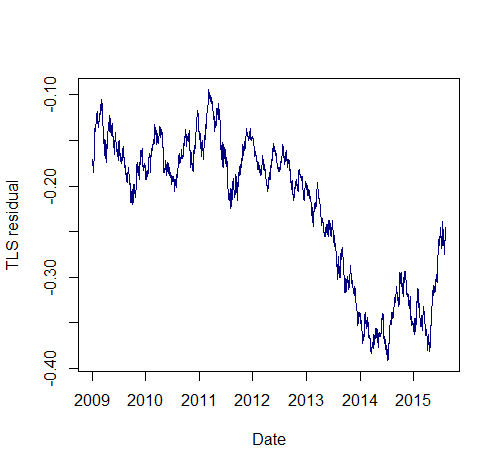 The Johansen test allows us to test for cointegration of more than two variables. Recall from the previous post, using a linear model of price changes:

that if λ ≠ 0, then Δy(t) depends on the current level y(t − 1) and therefore is not a random walk. We can generalize this equation for the multivariate case by using vectors of prices y(t) and coefficients λ and α, denoted Y(t), Λ and Α respectively. The Johansen test calculates the number of independent, stationary portfolios that can be  formed by various linear combinations of the price series based on the eignevector decomposition of  Λ. The urca  package contains an implementation of the Johansen test that provides critical values that we can use to test whether we can reject the null hypothesis that there exist 0, 1, 2, …, n-1 cointegrating relationships, where n is the number of constituent time series.


In this case, we can’t reject either null hypothesis that r (the number of cointegrating portfolios) is zero or one, since the test statistic in both cases is less than even the 10% critical value. That is, it is unlikely that we can form a stationary portfolio from the price history used in this example. However, it may still be worth pursuing a mean reverting strategy if the half-life of mean reversion is sufficiently low (see the previous post for more details).

As stated above, the eigenvectors form the optimal hedge ratio. They are conveniently ordered by maximum likelihood, so in this case we would select a portfolio of 1 lot of AUD/USD long or short and 3.41 lots of NZD/USD in the opposite direction. In this case, unfortunately, the resulting portfolio does not look any  more stationary than that constructed using the ordinary least squares and total least squares regression approaches:

Mean reversion of a portfolio of more than two instruments

We can add a third asset and use the Johansen test to determine the probability that there exists a mean reverting portfolio along with the hedge ratios of such a portfolio. In this case, I will add USD/CAD and take the reciprocal of price so that the quote currencies are consistent (note that when building a trading strategy from this triplet, that the directions signalled for USD/CAD would need to be reversed):


Again, we unfortunately find no significant cointegrating relationship. However, as discussed in the first post, we sometimes don’t need to hold our results to scientifically stringent statistical significance in order to make money, particularly if the half life of mean reversion is sufficiently short. Therefore, we will retain the first eigenvector to form a portfolio of the three instruments for further investigation. First, let’s take a look at a time series plot of the portfolio’s value:

The half-life of mean reversion of the portfolio is 53.2 days. This is calculated in the same manner as for a single mean reverting time series in the previous post, namely by regressing the value of the portfolio against its value lagged by one time period:


Recall that in the previous post, we were able to construct a theoretically profitable linear mean reverting strategy from a single time series with a half life of mean reversion of over 300 days, so at first glance, this result holds some promise.

The strategy suffers significant drawdown and only returns a profit factor of 1.04 and a Sharpe ratio of 0.29.

Obviously, the linear mean reversion strategy presented above and detailed in the previous post would not be suitable for live trading even if the example shown here had generated an impressive backtest. Applied to equities, it would require buying and selling an infinitesimal number of shares when price moves an infinitesimal amount. This is less of a problem when applied to currencies since we can buy and sell in units as small as one-hundredth of a lot. However, the real killer for such a strategy is the trading costs associated with bar-by-bar portfolio rebalancing, as well as the fact that we can’t know the capital required at the outset.

Having said that, there is still much value in testing a mean reversion idea with this linear strategy as it shows whether we can extract profits without any data snooping bias as there are no parameters to optimize. Also, a consequence of the bar-by-bar portfolio rebalancing is that the results of the linear strategy backtest are likely to have more statistical significance than other backtests that incorporate more complex entry and exit rules. Essentially, the simple linear strategy presented here can be used as a proof of concept to quickly determine whether a portfolio is able to be exploited using mean reversion techniques.

The equity curve of the Bollinger strategy is of similar shape to the linear mean reversion strategy, but it trades much less and allows for simpler control of risk and exposure.

This post extended the previous article on the exploitation of individual mean reverting time series by exploring the construction of portfolios whose market value is mean reverting. In addition to the simple linear mean reversion strategy, I also presented a more practical approach that could form the basis of an actual trading strategy.

As stated in the introductory paragraphs, I wanted to show the good and the bad of mean reversion trading. The equity curves presented show periods of outstanding performance as well as periods of the polar opposite. Clearly, there are times when mean reversion is highly profitable, and other times when it just doesn’t work (perhaps trend following is more suitable at these times). But how does one determine, in real-time, which regime to follow? How does one determine when to switch?

I’ve explored several options, including a simple filter based on a trend indicator and a filter based on the actual performance of the strategy in real-time. However, due to the lag associated with the filter values, these approaches are of little if any value. Diversification is another option, that is, continuously trade both mean reversion and trend following strategies at the same time in the belief that the profit from the dominant regime will more than make up for the losses of the other.

If you have an idea about how to address this issue, please let me know in the comments. I’d love to hear from you.

Here you can download the price data and scripts (Zorro and R) used in this post: Mean reversion 2