Kalman Filter Pairs Trading with Zorro and R: Putting it all together

In the first three posts of this mini-series on pairs trading with Zorro and R, we:

In this fourth and final post, we’re going to put it all together and develop a pairs trading script that uses Zorro for all the simulation aspects (data handling, position tracking, performance reporting and the like) and our Kalman implementation for updating the hedge ratio in real-time.

You can download the exact script used in this post for free down at the very bottom. Let’s go!

Step 1: Encapsulate our Kalman routine in a function

Encapsulating our Kalman routine in a function makes it easy to call from our Zorro script – it reduces the call to a single line of code.

Save the following R script, which implements the iterative Kalman operations using data sent from Zorro, in your Zorro strategy folder:

Recall that this implementation of the Kalman filter is almost parameterless. There are however two parameters that impact the speed at which the hedge ratio is updated by the Kalman algorithm, delta  in line 3 and  Ve in line 5.

You can experiment with these parameters, but note that changes here will generally require changes in the Zorro script, such as the spacing between trade levels (more on this below).

Experimentation is a good thing (it’s useful to understand how these parameters impact the algorithm), but a nice, stable pair trade should be relatively robust to changes in these parameters. A pair that depends on just the right values of these parameters is one I’d think twice about trading.

Having said that, a sensible use of these parameters is to adjust the trade frequency of your pairs in line with transaction costs and risk management approach (not to optimise the strategy’s backtested performance).

Step 2: Set up a Zorro pair trading script to exchange data with R

Here’s our simple pairs trading script modified to call the Kalman iterator function to update the hedge ratio. To experiment with this Zorro script you’ll need:

Like in our original vectorised backtest, this strategy is always in the market, simply entering a long position when the prediction error of the Kalman filter drops below its minus one standard deviation level and holding it until the prediction error crosses above its plus one standard deviation level, at which point the trade is reversed and a short position held.

This is not the optimal way to trade a spread, so we’ve left the door open to trade at multiple levels (line 9) with a user-specified spacing between levels (line 10).

But before we get to that, there’s an important box we need to tick…

Before we go further, we’ll aim to reproduce the results we got in the vectorised backtest we wrote in R way back in the first post of this series. That way, we can validate that our Zorro setup is working as expected.

This is an important (and easily overlooked) step because we’ll surely tinker with the strategy implementation (Zorro is really useful for efficiently doing that sort of experimentation), and we need to have confidence in our setup before we make any changes, do further research, and make decisions based on what we find.

If you’ve ever had to rewind a whole bunch of research because of a faulty implementation at the outset, you know what I’m talking about….

We’d expect some differences since Zorro provides an event-driven sequential backtester with very different assumptions to my hacky vectorised backtest. But we should see consistency in the hedge ratio, the positions taken, and the shape of the equity curve.

Here’s the Zorro output when we trade at one standard deviation of the prediction errors: 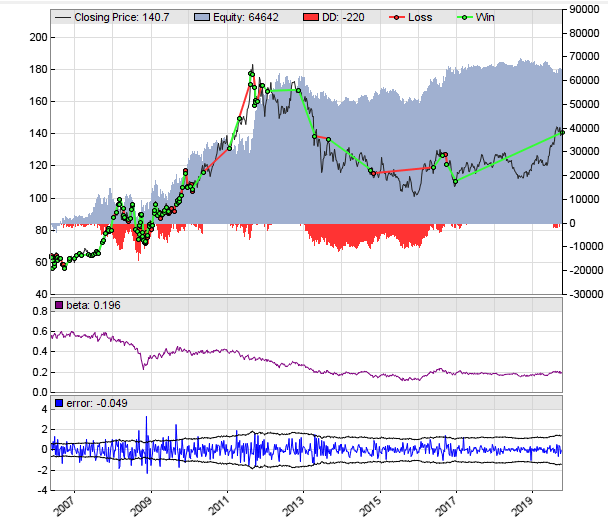 We also ran a more aggressive version through our vectorised backtester, which traded at half a standard deviation of the prediction errors. Here’s what that looks like in Zorro (simply change line 10 to #define Spacing 0.5): 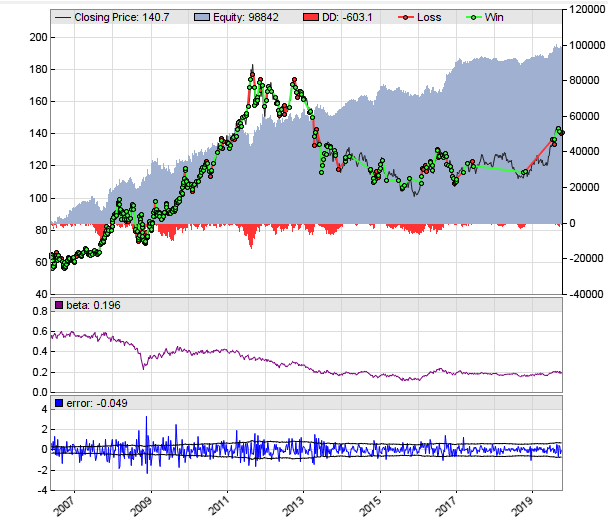 Again, virtually identical to the output of our vectorised backtest.

I’m calling that a win. Time to move on to some fun stuff.

Step 4: Iterate on the algorithm design

There are a bunch of things we can try with our pairs trading implementation. A few of them include:

Here’s an example of trading quite aggressively every 0.25 standard deviations of the prediction error, up to a maximum of eight levels:

Of course, when you trade like this you’re going to pay a ton in fees. But it gives you a taste of the sorts of things you can experiment with using this framework.

This concludes our mini-series on pairs trading with Zorro and R via the Kalman filter. We saw how you might:

Get the pairs trading script we used in this blog post!

Get this code now

You don't need to keep chasing that one perfect strategy...

See how you can use algos to systematise your trading, remove emotions and finally make your capital grow!

Get the free PDF Now
x

Enter your email and it's yours!