This Kalman Filter Example post is the first in a series where we deploy the Kalman Filter in pairs trading. Be sure to follow our progress in Part 2: Pairs Trading in Zorro, and Part 3: Putting It All Together.

If they did, pairs trading would be the easiest game in town. But the reality is that relationships are constantly evolving and changing. At some point, we’re forced to make uncertain decisions about how best to capture those changes.

One way to incorporate both uncertainty and dynamism in our decisions is to use the Kalman filter for parameter estimation.

The Kalman filter is a state space model for estimating an unknown (‘hidden’) variable using observations of related variables and models of those relationships. The Kalman filter is underpinned by Bayesian probability theory and enables an estimate of the hidden variable in the presence of noise.

There are plenty of tutorials online that describe the mathematics of the Kalman filter, so I won’t repeat those here (this article is a wonderful read). Instead, this Kalman Filter Example post will show you how to implement the Kalman filter framework to provide a dynamic estimate of the hedge ratio in a pairs trading strategy. I’ll provide just enough math as is necessary to follow the implementation.

For this Kalman Filter example, we need four variables:

For our hedge ratio/pairs trading application, the observed variable is one of our price series (p_1) and the hidden variable is our hedge ratio, (\beta). The observed and hidden variables are related by the familiar spread equation: [p_1 = \beta * p_2 + \epsilon] where (\epsilon) is noise (in our pairs trading framework, we are essentially making bets on the mean reversion of (\epsilon)). In the Kalman framework, the other price series, (p_2) provides our observation model.

For every time step:

To start the iteration, we need initial values for the covariances of the measurement and state equations. Methods exist to estimate these from data, but for our purposes we will start with some values that result in a relatively slowly changing hedge ratio. To make the hedge ratio change faster, increase the values of delta  and Ve in the R code below. The initial estimates of these values are as close to ‘parameters’ that we have in our Kalman filter framework.

Here’s some R code for implementing the Kalman filter.

The two price series used are daily adjusted closing prices for the “Hello world” of pairs trading: GLD and GDX (you can download the data at the end of this post).

First, read in and take a look at the data: 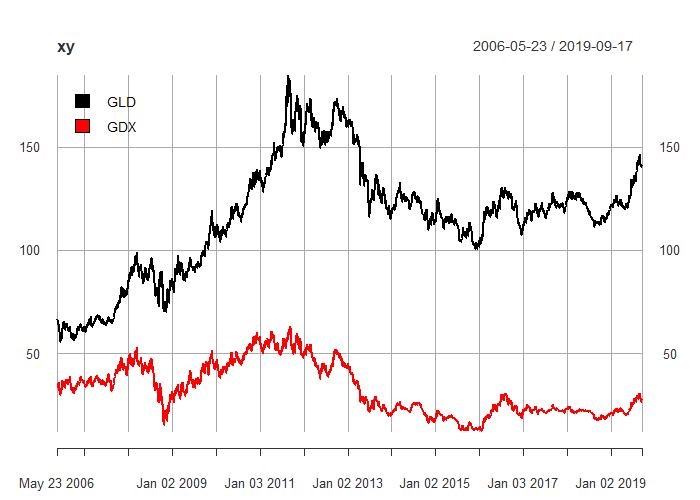 Here’s the code for the iterative Kalman filter estimate of the hedge ratio:

And here is the resulting plot of the dynamic hedge ratio: 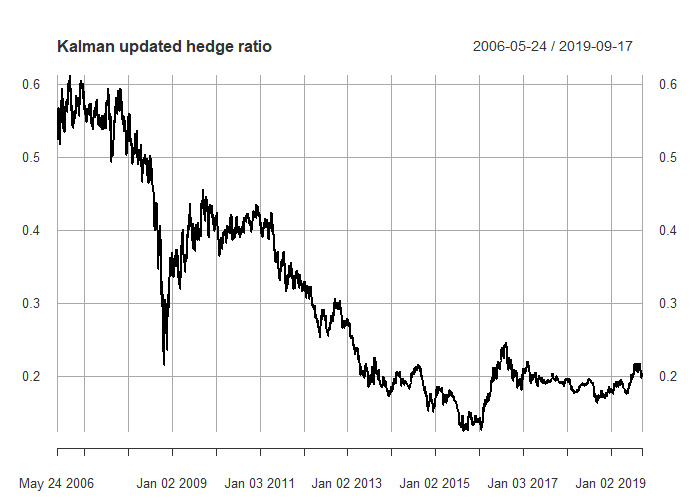 The value of this particular Kalman filter example is immediately apparent – you can see how drastically the hedge ratio changed over the years.

We could use that hedge ratio to construct our signals for a trading strategy, but we can actually use the other by-products of the Kalman filter framework to generate them directly (hat tip to Ernie Chan for this one):

The prediction error (e in the code above) is equivalent to the deviation of the spread from its predicted value. Some simple trade logic could be to buy and sell our spread when this deviation is very negative and positive respectively.

Here’s a plot of the trading signals at one standard deviation of the prediction error (we need to drop a few leading values as the Kalman filter takes a few steps to warm up): 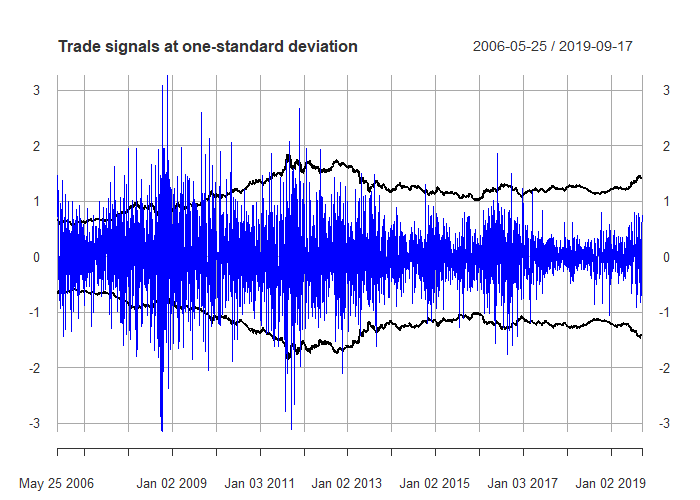 Cool! Looks OK, except the number of signals greatly diminishes in the latter half of the simulation period. Later, we might come back and investigate a more aggressive signal, but let’s press on for now.

At this point, we’ve got a time series of trade signals corresponding to the error term being greater than one standard deviation from its (estimated) mean. We could run a vectorised backtest by calculating positions corresponding to these signals, then determine the returns of holding those positions.

In fact, let’s do that next:

Just a quick explanation of my hacky backtest…

The ugly nested ifelse statement in line 2 creates a time series of trade signals where sells are represented as -1, buys as 1 and no signal as 0. The buy signal is the prediction error crossing under its -1 standard deviation from above; the sell signal is the prediction error crossing over its 1 standard deviation from below.

The problem with this signal vector is that we can get consecutive sell signals and consecutive buy signals. We don’t want to muddy the waters by holding more than one position at a time, so we use a little trick in lines 7 – 10 to firstly replace any zeroes with NA, and then use the na.locf function to fill forward the NAvalues with the last real value. We then recover the original (non-consecutive) signals by taking the diffand dividing by 2.

If that seems odd, just write down on a piece of paper a few signals of -1, 1 and 0 in a column and perform on them the operations described. You’ll quickly see how this works. 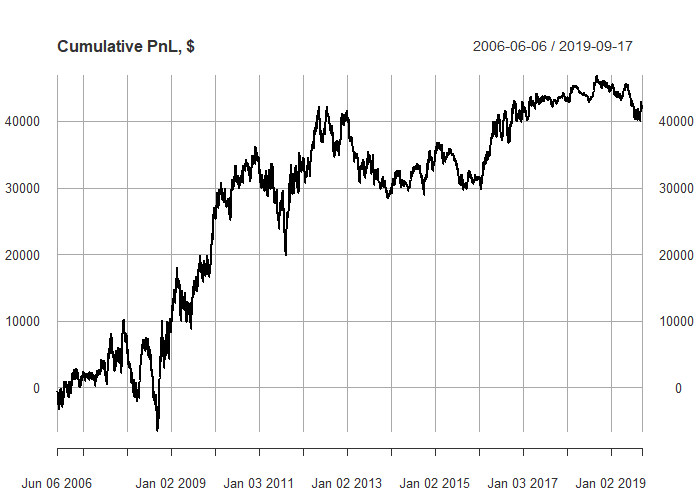 But recall that our trading signals were few and far between in the latter half of the simulation? If we plot the signals, we see that we were actually holding the spread for well over a year at a time:

I doubt we’d want to trade the spread this way, so let’s make our signals more aggressive: 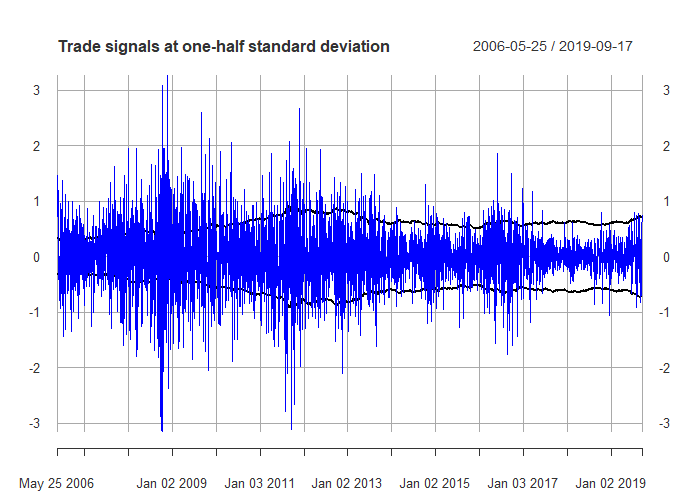 Better! A smarter way to do this would probably be to adapt the trade level (or levels) to the recent volatility of the spread – I’ll leave that as an exercise for you.

These trade signals lead to this impressive and highly dubious equity curve: 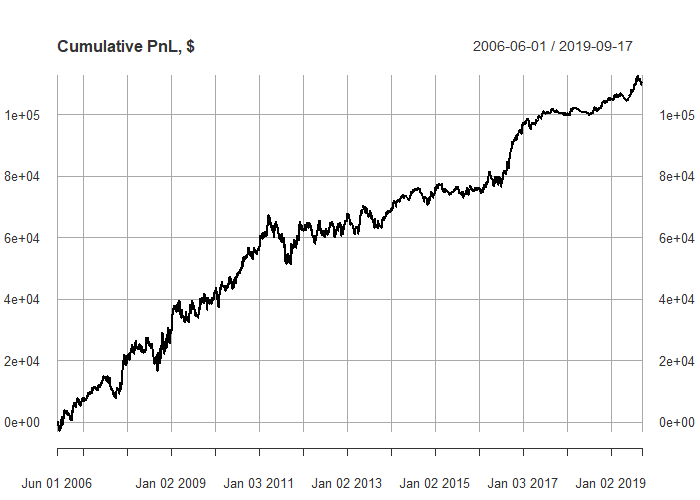 Why is it dubious?

Well, you probably noticed that there are some pretty out-there assumptions in this backtest. To name the most obvious:

My gut feeling is that this would need a fair bit of work to cover costs of trading – but that gets tricky to assess without a more accurate simulation tool.

You can see that it’s a bit of a pain to backtest – particularly if you want to incorporate costs. To be fair, there are native R backtesting solutions that are more comprehensive than my quick-n-dirty vectorised version. But in my experience none of them lets you move quite as fast as the Zorro platform, which also allows you to go from backtest to live trading with almost the click of a button.

You can see that R makes it quite easy to incorporate an advanced algorithm (well, at least I think it’s advanced; our clever readers probably disagree). But tinkering with the strategy itself – for instance, incorporating costs, trading at multiple standard deviation levels, using a timed exit, or incorporating other trade filters – is a recipe for a headache, not to mention a whole world of unit testing and bug fixing.

On the other hand, Zorro makes tinkering with the trading aspects of the strategy easy. Want to get a good read on costs? That’s literally a line of code. Want to filter some trades based on volatility? Yeah, you might need two lines for that. What about trading the spread at say half a dozen levels and entering and exiting both on the way up and on the way down? OK, you might need four lines for that.

The downside with Zorro is that it would be pretty nightmarish implementing a Kalman filter in its native Lite-C code. But thanks to Zorro’s R bridge, I can use the R code for the Kalman filter example that I’ve already written, with literally only a couple of minor tweaks. We can have the best of both worlds.

In Kalman Filter Example part 2, I’ll show you a basic pairs trading script in Zorro, using a more vanilla method of calculating the hedge ratio. After that, I’ll show you how to configure Zorro to talk to R and thus make use of the Kalman filter algorithm.

I’d love to know if this series is interesting for you, and what else you’d like to read about on Robot Wealth. Let us know in the comments.