In the first part of this article, I described a procedure for empirically testing whether a trading strategy has predictive power by comparing its performance to the distribution of the performance of a large number of random strategies with similar trade distributions. In this post, I will present the results of the simple example described by the code in the previous post in order to illustrate how susceptible trading strategies are to the vagaries of randomness. I will also illustrate by way of example my thought process when it comes to deciding whether to include a particular component in my live portfolio or discard it.
I tested one particular trading system on a number of markets separately in both directions. I picked out three instances where the out of sample performance was good as candidates for live trading. The markets, trade directions and profit factors obtained from the out of sample backtest are as follows:
USD/CAD – Short – Profit Factor = 1.79
GBP/USD – Long – Profit Factor = 1.20
GBP/JPY – Long – Profit Factor = 1.31
Next, I estimated the performance of a random trader with the same trade frequencies, average duration and direction of trades by simulating 5,000 random backtests using the Zorro Lite-C code in the previous post and plotted a histogram and cumulative frequency distribution of the profit factor. In a neutral market, I would expect the distribution of profit factors to resemble a normal distribution with mean of slightly less than 1 as a result of transaction costs. Any skew present in the distribution would reflect the presence of a trend in the price series. For example, for a simulation of long trades, a left-skewed distribution would indicate an overall downwards trend in the price series, while a right skew would indicate an overall upwards trend. The reverse would be true for a random simulation of short trades.
Below are the histograms and cumulative frequency distributions for each candidate portfolio component. The red lines indicate the actual profit factors obtained in the non-random system’s out of sample backtest. 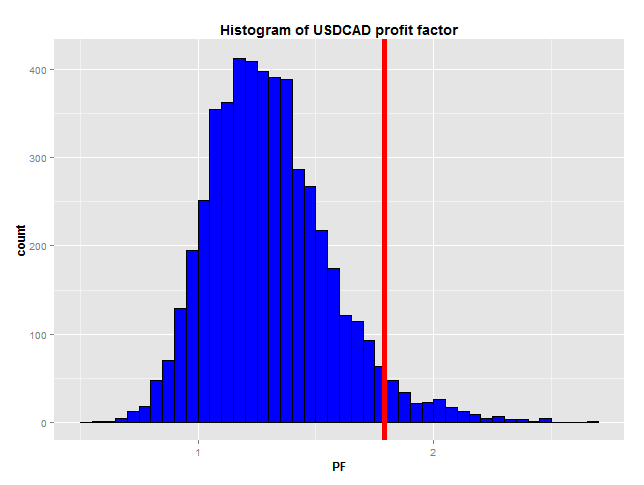 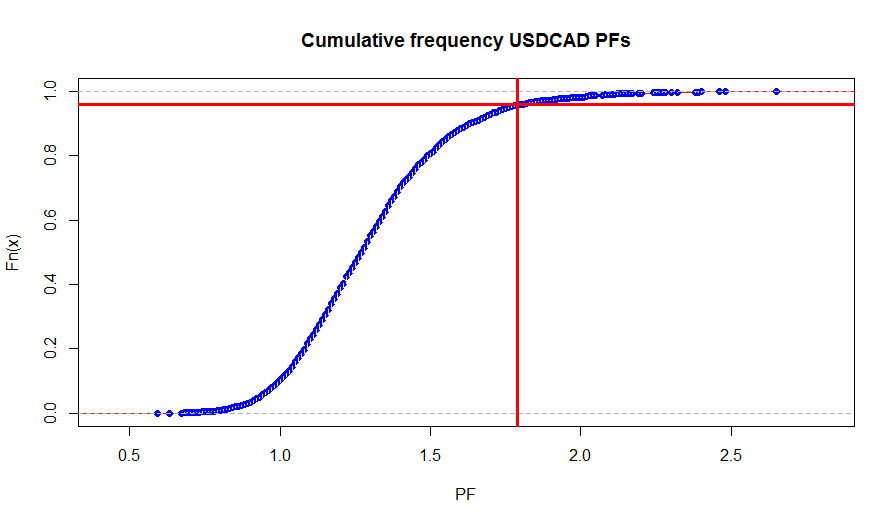 As expected, the profit factors are generally normally distributed with some skewness. Our USD/CAD portfolio component did well in the out of sample backtest, with a profit factor of 1.79. The profit factor distribution obtained by simulating random trades of the dame direction and average frequency and duration is right skewed, indicating a trend in the same direction as our strategy – short in this case. This may indicate that some of the non-random strategy’s performance is due to the market’s trend, or put another way, due to simply being lucky enough to be in the right market at the right time. Examination of the cumulative frequency distribution reveals that our non-random strategy out-performed 96% of random strategies. So we can conclude with 96% certainty that our strategy has predictive power, even though it trades with the dominant trend in the market. Put another way, we are 96% certain that the strategy’s performance was not just due to being in the right market at the right time. I am comfortable trading this component in my live portfolio. 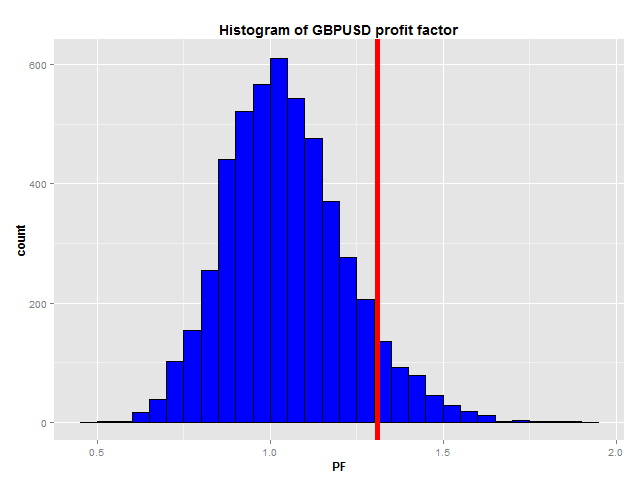 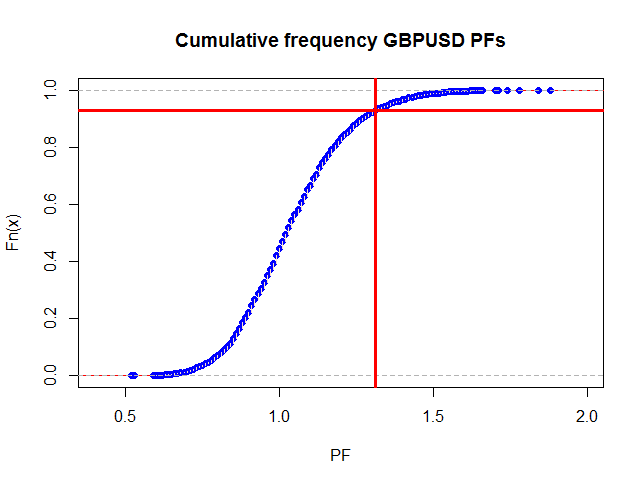 Similar examination of the GBP/USD portfolio component reveals a slight right skew in the random profit factor distribution, indicating a slight trend in the same direction as the candidate strategy trades. In this case, the candidate strategy out performed 92.5% of random strategies. This candidate lies in a tricky position on the distribution: an oft-cited minimum confidence limit in the scientific literature is the 95th percentile, of which this strategy is just shy. In addition, its out of sample profit factor was only 1.20, which is on the low side. All things considered, I’ll leave this component out of my active portfolio. 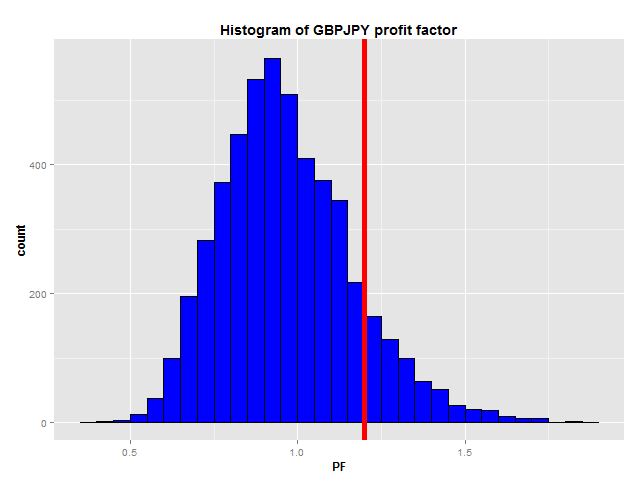 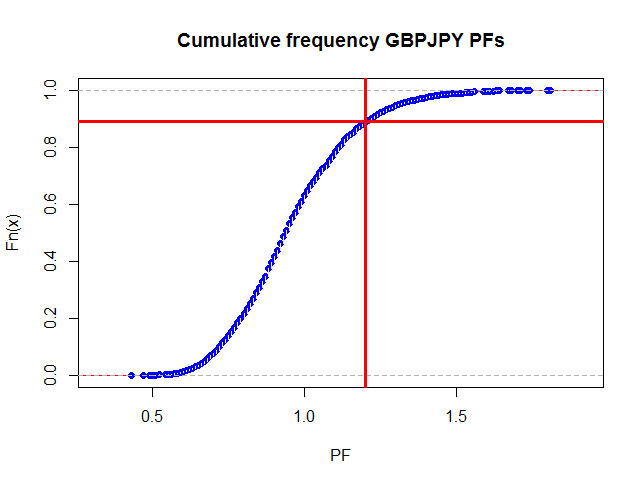 Finally, examination of the GBP/JPY data reveals a left skew in the distribution of the random trader’s profit factor, indicating a slight trend in the opposite direction to the candidate strategy. In this case, our non-random strategy’s profit factor of 1.31 beats 89% of random traders. Again, I’m not overly comfortable adding this strategy to my live portfolio, however the fact that it does reasonably well even while trading against the underlying bias in the price data is enough to pique my interest. I’m going to add this component to my live forward test account, which is only minimally capitalised, but is a much more accurate indicator of performance than a demo account. I’ll monitor this component on that account for some time, perhaps two or three months, gathering further statistics about its performance. Depending on the results, I may add it to my live portfolio, or I may discard it altogether. I don’t know enough at present to make a decision one way or another.
Would you make the same decisions I made in assessing these candidate strategies? If not, why not?