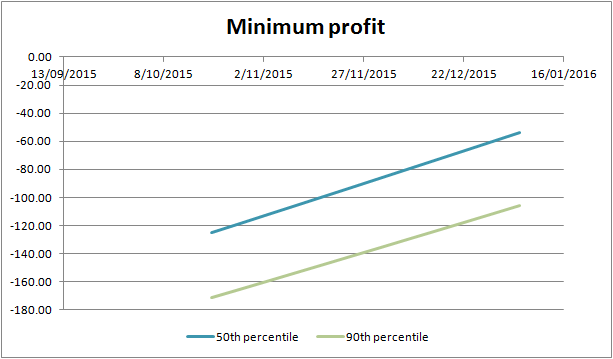 One of the very useful aspects of this sort of analysis is that it serves to temper the expectation associated with taking a strategy live. Personally, I know that after all the research and development that goes into developing a strategy, it is all too easy to let oneself think that the money will just roll in as soon as you go live. This approach brings the developer back to reality in terms of profit expectations, but it will also provide the confidence to continue trading while you should. In short, it brings objectivity to the forefront, which of course is a cornerstone of any statistical or quantitative approach to the markets.
I like jcl’s Cold Blood Index a lot. In a nutshell, it describes the similarity of a current drawdown to the backtest drawdown profile by examining multiple windows of the backtest balance curve, with each window equal in length to the length of the drawdown of interest (probably the current drawdown if trading live, but this approach is also useful for considering hypothetical drawdowns prior to going live).
The Cold Blood Index is more meaningful than the approach I used, but it does suffer from a similar drawback – being a function of the balance curve in the backtest. If you accept that the balance curve obtained in the backtest is one possible outcome amongst an infinite number of possibilities due to the random nature of individual trade results, then the result obtained with the Cold Blood Index is likewise one possible outcome amongst many.
(As an aside, this condition can be validated by examining the autocorrelation of the backtest returns series with various lags using either Zorro, R or some other statistical tool. Nearly every strategy I’ve experimented with, and definitely the ones that I’ve taken live, have all shown statistically insignificant return autocorrelations).
The Cold Blood Index could be improved by incorporating the algorithm into a Monte Carlo routine that creates many unique balance curves by randomly sampling the backtested trade results, and running it separately on each curve. I was fortunate enough to receive advice from jcl on how to accomplish this using Zorro, and my implementation is reproduced below. Most of the code is jcl’s, I have simply added the loop in which the balance curve is shuffled before being subject to jcl’s Cold Blood Index algorithm. I also added code to store the Cold Blood Index value generated in each loop iteration in an array and to calculate the 5th and 95th percentile values.

To compare methods for pulling out of a strategy, I looked at the results obtained from my original method (Method 1), the Cold Blood Index calculated from the backtest balance curve (one-sample Cold Blood) and the 5th percentile Cold Blood Index calculated from 4,000 randomly sampled balance curves (resampled Cold Blood). These results are for a drawdown of 55 days duration that started immediately upon strategy initiation (these results are for a real strategy that I am currently trading live. 55 days equates to a trading time that extends to the end of the year from the date that I initiated it. I am curious to investigate what sort of drawdown I should endure at the end of the year).