I’ve been helping a family friend with his trading.

I’ve given him a simple systematic strategy to trade by hand.

We can plot the distribution of historic trade returns from past trading or a backtest as a histogram. This is useful because it gives us a hint as to what the “edge” of our strategy might be – if we could ever truly know such a thing.

In this case, our strategy had positive mean and negative skew. (As many things that make money tend do, regrettably)

Now, when we make a trade, we’re really just taking a random sample from a bucket of returns.

You might think of it like we’re picking observations out of the bucket described by the histogram we just made.

The histogram doesn’t show us the true nature of the distribution of returns in the bucket – just the returns that occurred in the past.

The “true distribution” changes with time (it is stochastic) and cannot be observed directly. We can only infer it from the past.

So the best we can know is that, in the past, it looked like we had an edge.

We might run rolling stats to try to observe the time-varying nature of things – but we’d be working with only a few samples and the variance of our trade return is large. So we do our best to estimate what the “true process” looks like, by inferring it from past observations and our understanding of market dynamics.

Now we have set reasonable expectations about the P&L distribution, we start trading…

My friend has placed about 20 trades and he’s starting to try to make some distinctions based on individual trades.

This is what humans do. They look for patterns in noise.

Think about the trade p&l histogram we made at the start… Imagine we’re building that up trade by trade, observation by observation. How many points would you need before it had a meaningful shape?

It would be a lot… it would take a long time to build this histogram up block by block. 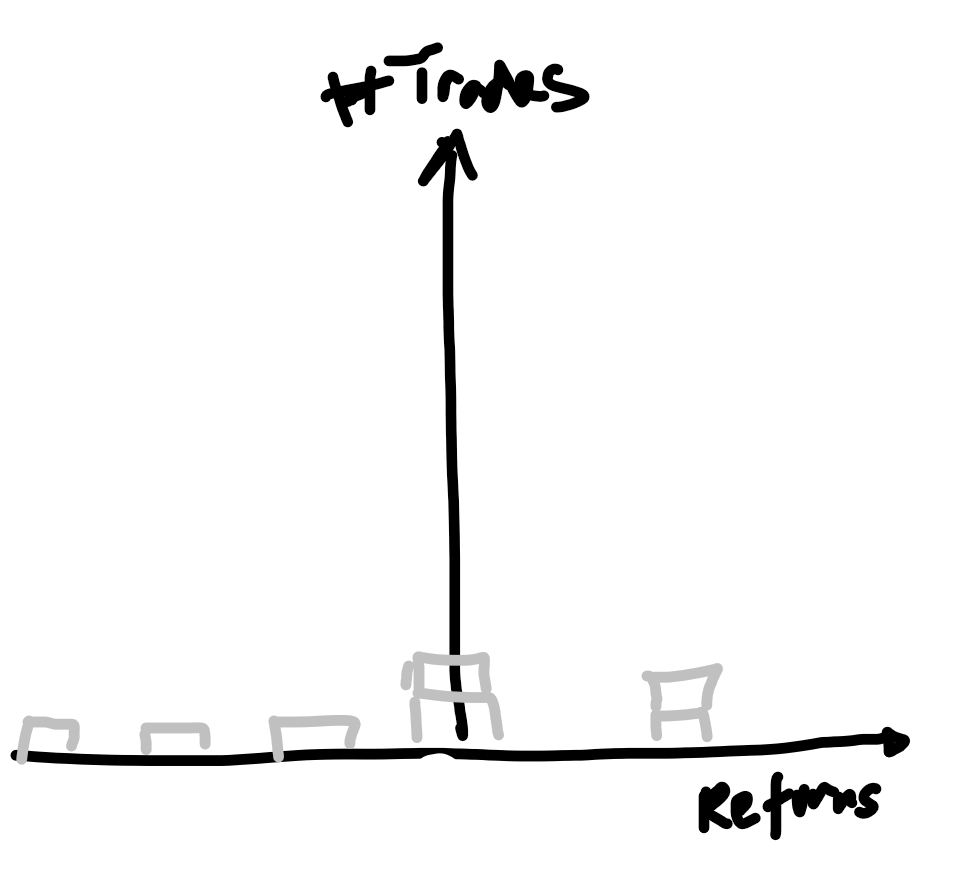 Edge can only be analysed in the aggregate

All analysis needs to be undertaken in the aggregate, ideally over as many stable observations as possible.

But everything is non-stationary (it changes with time) so our observations always arrive later than we want them to, and there are never enough of them.

This is why trading is hard and you don’t get much feedback (on edge) from observing your own trades. You get plenty of useful quick feedback on things such as market impact, but the data on “edge” takes forever to collect and stuff is constantly changing underneath you

You’re extremely unlikely to make much sense of this kind of probabilistic thinking by watching the market – unless you are trading extremely fast and disciplined.

You need a quantitative approach. You need to analyze in aggregate. You need an understanding of stats

You need a critical mind. You need to understand why something works, and track whether those conditions are still in place – so you can try to pre-empt the change in the return process.

You need to understand you can never know if you have an edge right now.

This is not something to be feared… this is what makes trading awesome!😀

You never know if you have an edge right now, but when you think you do – sample from it as much as you can in the simplest, most robust way possible.

Want to learn more about our upcoming Bootcamp? Sign up for the waitlist – Trade like a Quant Bootcamp here

In this quant trading course, we concentrate on the simple things that work: the things that turn money into more money.