Get a simple, evidence-based approach to profitable retail algo trading you can use today 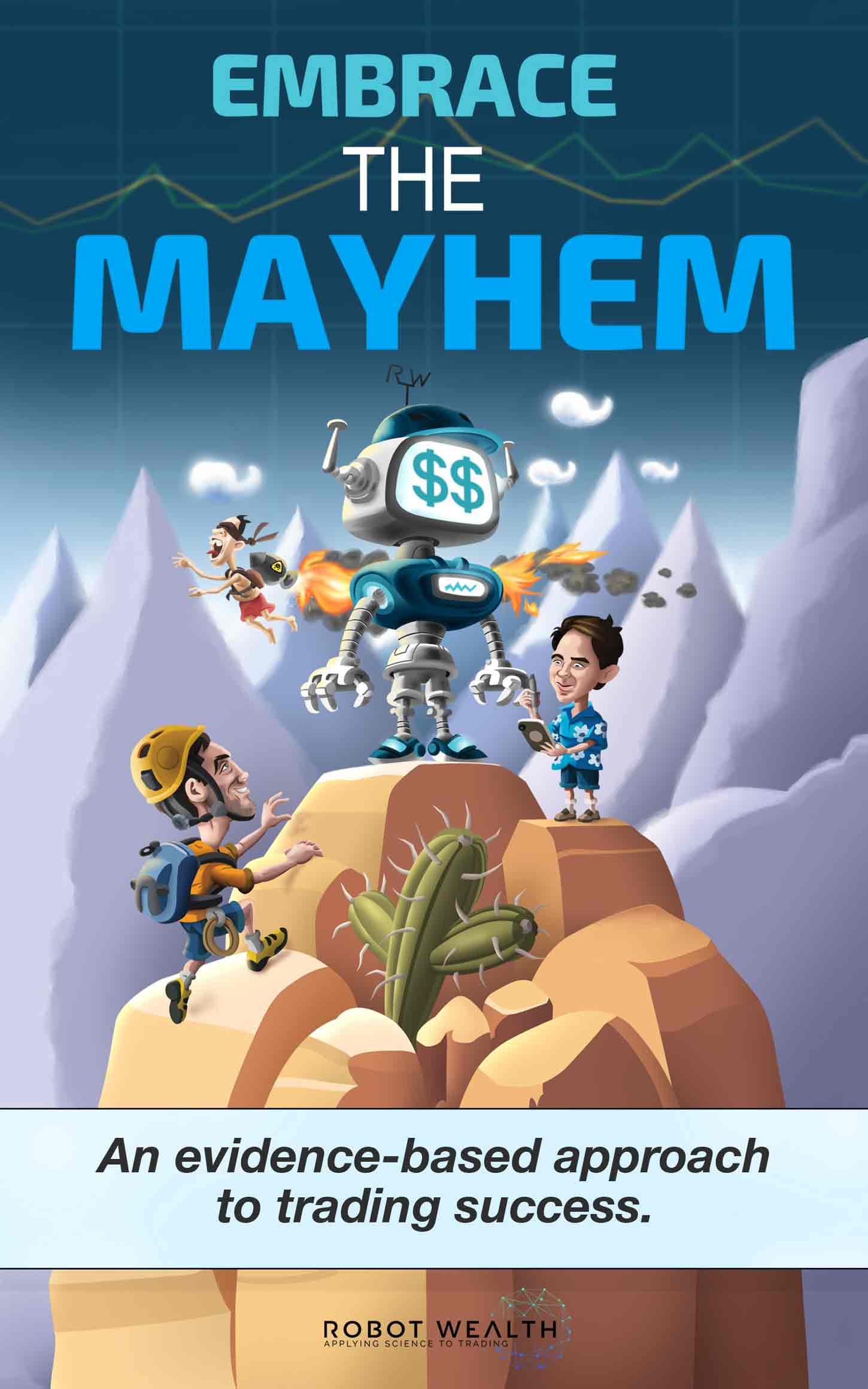 Discover the quantitative skills, approach, and even the exact markets and inefficiencies you can use to grow your capital  — written by two successful professional traders.

Can this strategy make money?

See why you are being misled out of your time, energy and money by "common-sense" trading content

If your Google searches are similar to most other aspiring traders, such as looking for “RSI trading strategies”, you'll find dozens of articles like:

These seem quite harmless, don't they? But, trading content doesn't need to promise quick riches to be just as dangerous as the most obvious deceptions.

Check out this common “RSI Trading Strategy” you can find on Google:

"If the RSI is less than 30, it means the market is oversold, and the price will probably eventually increase. Once the reversal is confirmed, a buy trade can be placed.

Conversely, if the RSI is more than 70, it's overbought, and the price will probably soon decline. After a confirmation of the reversal, a sell trade can be placed.

The 50 level is the midline that separates the upper (Bullish) and lower (Bearish) territories. In an uptrend, the RSI is usually above 50, while in a downtrend, it is below 50."

That all sounds super simple, right? Just wait until the RSI crosses 30, confirm the reversal, then buy! Wow, who knew it was so straightforward. Better sign up.

You've likely read a ton of content like this online. It sounds plausible enough, maybe you've even built strategies around such simple concepts....

Such simple concepts can destroy your chances of ever returning a profit from the markets. Most traders don't even realise their approach is being hijacked with such oversimplified, misleading information. What's so wrong in this case?

1. The RSI is nothing more than a mathematical transformation of recent price data that normalises the data to its own range (it just tells you where price was in relation to its recent past).

Does that mean it’s sensible or rational to believe this predicts future price movement? No. The article states this as fact and doesn’t even bother investigating it. It’s simply assumed. Job done, let’s go to the beach.

This is NOT a reliable approach any seasoned trader would ever use, because experience tells them it wouldn't work.

Take any market in any financial product without even knowing where it’s priced and you could safely say “price will probably eventually increase.” Even if this was accurate, over what time period? How much can we stomach an adverse move?

Extraordinary claims require extraordinary evidence. If these claims are made without experiment or evidence to back them up, you should move on.

3. There's no such thing as a "trading style"

You'll find this paragraph further down the same article:

"Remember, there isn't just one way to trade the RSI. You have to find the trading style that works best for you. But sometimes you just need a few ideas to get your creative juices flowing."

Our only trading style is making more money than we lose, and maybe the fact that I do it in beach shorts. We don't have the luxury of trading styles.

Real trading is scratching around for edges that disappear as fast as you find them. It's smart allocation into ideas which have evidence of working, and fast scaling back on ideas whose evidential weight is swinging into the negative with time. It’s dealing with the messy issues of trade execution, reconciling your backtest assumptions with market realities and making adjustments as you go.

You are being misguided

Do you see how easy it is to adopt false assumptions?

You'll see dozens of examples just like this every day: oversimplified, misrepresented or even deceitful information on trading. You're being mislead, which costs you time, capital and maybe even your love of trading.

There's a better approach, but it normally comes at a cost....

Successful trading is an implementation and business problem.

This is great news for you. It means that you don't need to be on the bleeding edge of the latest research or technology in order to carve out your slice of market success.

But it does mean that you need to approach the markets differently.

Instead of hunting tirelessly for the single, perfect strategy (which doesn't exist), you can achieve amazing results with a more basic, yet financially rewarding approach:

This straightforward approach has allowed us to make trading our full-time careers. Sadly, this intuition and the skills needed to implement it often arrives only after years of tough trial and error in the markets.

Imagine only learning the skills and theory we use to trade for a living. No unnecessary technical challenges or bragging charts showing unachievable returns. Just the skills, insights and intuition you can apply to your trading today.

What if you didn't have to experience all that failure and overwhelm before knowing what does and doesn't work in the markets? I'm Kris, ex-engineer, prop trader and founder of Robot Wealth. I've been a hedge fund quant and have consulted with Asia's brightest fund managers and fintechs. Now I'm a partner at my prop firm, and I'm using Robot Wealth to bring those skills to you. I'm James, I’ve traded for over 16 years, spending the first 10 in institutional finance. I work with the community daily, sharing my research, and turning the community’s ideas into profitable strategies. Embrace the Mayhem is the result of all the hard truths, punishing lessons and life-changing rewards from the decades we've spent in professional and retail trading. All distilled down into a book you can use to navigate the markets while avoiding our expensive mistakes.

This book will arm you with the approach used by full-time quants, plus a healthy dose of scepticism and realistic expectations. You'll see what in-the-trenches trading looks and feels like, as well as what does and doesn't work.

You'll come out the other side of this ebook a different trader. Chapter 1
Deception and Confusion:
know when you're being lied to

How do you recognise hidden deceptions before investing so much time, money and energy? Why do we fall for comfortable yet dangerous ideas like"finding your trading style" when we have no such luxury in trading?

Maybe you know how hard it is to rebuild your confidence after being badly mislead or deceived. Maybe you're lucky to have avoided such a frustrating blow.....so far.

We'll arm you with healthy scepticism to protect you from deceptive offers or claims, and we'll reset your view of trading so you can start your journey safely and sensibly. Trading isn't the "passive" 400% returns all the FX gurus talk about, but it's not a low-paying line of work, either. Any honest trader will admit that real trading is messy, but it's also extremely fulfilling and financially rewarding if you adopt the key systematic and psychological principles used by successful traders.

Discover the truth behind the unpredictable and wonderful world of trading, including the approach and mentality you need to build your skills, leave your demo account and grow your capital into something potentially life-changing. It's no secret that retail traders face a lot more obstacles than their professional colleagues:

We'll address those questions, as well as what success looks like as a solo retail trader, and how to bypass limitations by trading other people's capital. Explore case studies of profitable traders from different backgrounds and learn directly from their success. Chapter 4
What really generates profit, especially as a retail trader?

Did you know there are only two ways to make money in the markets? We'll show you how to approach these scientifically, like a true quant would, including:

Also see the tools we use to trade, and learn why quantitative trading is the only trading that works for long-term growth. Chapter 5
Skip years of frustration and error:
An approach to trading that works

So many retail traders trash a potentially viable strategy because it didn't backtest well. If only they knew that through a simple, yet smart combination of different mediocre edges, you can turn a volatile equity curve into one that will generate smoother, mouth-watering returns for your portfolio.

See how to combine the strategies and inefficiencies mentioned in this book, with this new approach, to open up a whole new world of trading opportunities for you to profit from. It's not easy, but it's remarkably simple, and we'll show you how.

See What Our Members Say about Robot Wealth Many of our members are exactly like you. They've been exposed to the worst of the trading industry, and too many others have been burned soo badly they quit altogether, which is unacceptable.

The Robot Wealth mission is to only share the skills, tools and theory that are necessary for your success as a trader. This is your chance to learn directly alongside people who trade for a living, so you can finally turn this part-time hobby into a source of wealth.

But before you read this book,
a quick warning

You'll likely land in one of three positions at the end:

1. Trading isn't for you

You'll realise trading isn't the easy cash cow you expected, and you'll save a lot of time doing something else. If you're here just to get rich, there are more straightforward ways to do it.

You'll take all of these realities on the chin, regroup and begin a seriously fun trading journey anyway. Armed with the right approach and insights, you're ready to work hard for your goals.

These realities have confirmed your passion for trading. Win or lose, you love the markets, and the potential financial rewards for getting good at something you love.

If you're in group 1, that's okay, you've saved yourself a lot of wasted time.

If you're in groups 2 or 3, we can't wait to show you exactly what you need to know to start working towards your trading goals — starting today....

Ready to discover the surprisingly simple approach we use to trade full-time — without all our past failures?

This 20 buck ebook can save you $100s, even $1000s in wasted capital, useless products or subscriptions. Not to mention the endless hours lost on dead end ideas. Get your copy instantly....

Get your copy of Embrace the Mayhem